Why does the Obama administration treat our military veterans like human garbage?  Every year on Memorial Day and Veterans Day, Barack Obama and our other politicians make very nice speeches, but the truth about how they feel about our veterans can be seen in how they are treated every single day.  In the United States today, there are well over half a million veterans that have been waiting for at least 125 days to have their benefit claims processed.  Many of them will ultimately have their claims sent back or denied just so a government employee somewhere can get a bigger bonus.  Meanwhile, conditions at VA facilities all over the country are absolutely abysmal, and many veterans have to wait more than half a year just to get an appointment at one of those facilities.  Once you start looking into how this country really treats military veterans, it becomes easier to understand why 22 military veterans commit suicide in America every single day.  Our vets have a higher rate of unemployment, a higher rate of poverty, a higher rate of homelessness, a higher rate of depression and a higher rate of divorce then the general population.  It is a crying shame.  One of the ways that any society is judged is by how it treats military veterans, and the truth is that America has failed miserably.  This has been particularly true since Barack Obama has been in the White House.

1. The average claim for veteran benefits takes more than half a year to be processed.

2. The Department of Veterans Affairs has a backlog of more than half a million overdue claims for benefits that are at least 125 days old.

4. Thousands upon thousands of military veterans that are waiting for their claims to be processed are dealing with absolutely horrible injuries…

Of those who have sought VA care:

• At least 156 are blind, and thousands of others have impaired vision.

• Thousands are disfigured, as many as 200 of them so badly that they may need face transplants. One-quarter of battlefield injuries requiring evacuation included wounds to the face or jaw, one study found.

5. At one VA hospital in Wisconsin, one military veteran with a broken jaw that was seeking treatment still had not had his jaw fixed after a month and a half.

6. Today, it takes military vets an average of seven months to get an appointment at a VA facility.

*Bathrooms filthy with what appeared to be human excrement

*Dirty linens from some patients mixed in with clean supplies

*Examining tables that had dried blood and medications still on them

*Equipment used to sterilize surgical instruments that had broken down

*Some patients were forced to beg for food and water

8. As I have written about previously, applying for veteran benefits is extremely complicated, and VA employees are actually paid bonuses for denying claims…

The truth is that we have made it extremely difficult for our military veterans to claim the benefits that we have promised them.  Vets have to fill out an absurdly complicated 23 page application and if they make even one small mistake their applications can be stonewalled for years.  The U.S. Veterans Administration actually has a policy under which they pay large bonuses to employees that meet certain application processing goals.  This explains why approximately 70% of the claims submitted to the Veterans Administration are refused or sent back to be redone.  In fact, using the Freedom of Information Act, one local NBC station was able to learn that $250,000 was paid in bonuses to VA employees who work inside the Poff Federal Building in Roanoke, Virginia in just one year alone.

9. Large numbers of military veterans that legitimately should be getting benefits are having their claims denied by the federal government.  Just check out the following example from a Veterans Today article…

In one case, we found a veteran with 40 percent of his brain removed found to be healthy and employable.  He was also missing his right arm.  The physician who examined him over looked the arm and failed to note the cognitive degeneration the traumatic brain injury had caused.

10. Last year, more than 85,000 military veterans were treated for sexual abuse that they suffered while serving in the military.  40 percent of them were men.

11. According to a recent Defense Department survey, approximately 14,000 men in the U.S. military were sexually assaulted by other men during 2012.

12. According to the Washington Post, there is an epidemic of sexual assaults being committed by military recruiters.  The Pentagon is pledging to do something about the problem…

“The secretary has made it clear that we will spare no effort to rid our military of sexual abuse,” said George Little, the Pentagon press secretary. “The fact that there have been problems of sexual abuse during the recruiting process is simply intolerable.”

13. The number of active members of the U.S. military that are killing themselves now exceeds the number that are dying on the battlefield.

14. Since the beginning of the Iraq War, twice as many members of the Texas National Guard have killed themselves as have been killed in combat.

15. According to one recent study, 22 military veterans kill themselves in the United States every single day.

16. At this point, combat veterans account for about 20 percent of all suicides in the United States.

17. The unemployment rate for military veterans is significantly higher than for the population as a whole.  This is especially true for younger veterans.

18. On any given night, approximately 200,000 military veterans are homeless in the United States.

19. All over America, monuments that honor military veterans are crumbling and falling apart.  For much more on this, please see this article.

20. Under the Obama administration, many military veterans have had to pay to have their medals shipped to them.  For example, one soldier actually had to pay a 21 dollar shipping fee to get his Purple Heart.  The following is from the Huffington Post…

War comes with an incalculable human cost. And apparently a shipping fee of about $21.

Retired Sgt. Major Rob Dickerson says that’s the price he was forced to pay when his Purple Heart — the medal issued to soldiers wounded in action — arrived at his door, C.O.D.

Instead of being awarded the military honor in a formal ceremony, the vet with 29 years in the service was handed his award, and a shipping invoice, by a FedEx deliveryman outside his Sioux Falls, S.D., home.

21. In some areas of the country the U.S. Department of Veterans Affairshas been caught banning the words “God” and “Jesus” during funeral services for veterans.

22. Today, the federal government provides “end of life” literature to veterans that helps them to determine when their lives are “no longer worth living“…

“Your Life, Your Choices” presents end-of-life choices in a way aimed at steering users toward predetermined conclusions, much like a political “push poll.” For example, a worksheet on page 21 lists various scenarios and asks users to then decide whether their own life would be “not worth living.”

The circumstances listed include ones common among the elderly and disabled: living in a nursing home, being in a wheelchair and not being able to “shake the blues.” There is a section which provocatively asks, “Have you ever heard anyone say, ‘If I’m a vegetable, pull the plug’?” There also are guilt-inducing scenarios such as “I can no longer contribute to my family’s well being,” “I am a severe financial burden on my family” and that the vet’s situation “causes severe emotional burden for my family.”When the government can steer vulnerable individuals to conclude for themselves that life is not worth living, who needs a death panel?

23. One study discovered that approximately one-third of all military veterans returning from Afghanistan and Iraq were officially determined to be mentally ill by government officials.

24. All over America, “mental illness” is being used as a reason to take guns away from military veterans.

25. The federal government is increasingly labeling military veterans as “potential domestic terrorists” if they express viewpoints that are critical of the government.  The following is from a recent article by John Whitehead…

Making matters worse, thanks to Operation Vigilant Eagle, a program launched by the Department of Homeland Security in 2009, military veterans returning from Iraq and Afghanistan are also being characterized as extremists and potential domestic terrorist threats because they may be “disgruntled, disillusioned or suffering from the psychological effects of war.” As a result, these servicemen and women–many of whom are decorated–are finding themselves under surveillance, threatened with incarceration or involuntary commitment, or arrested, all for daring to voice their concerns about the alarming state of our union and the erosion of our freedoms.

An important point to consider, however, is that the government is not merely targeting individuals who are voicing their discontent so much as it is locking upindividuals trained in military warfare who are voicing feelings of discontent. Under the guise of mental-health treatment and with the complicity of government psychiatrists and  law-enforcement officials, these veterans are increasingly being portrayed as ticking time bombs in need of intervention.

Are you upset yet?

The way that the federal government is treating military veterans is absolutely shameful.

Do you have a story that illustrates how our military veterans are being abused? 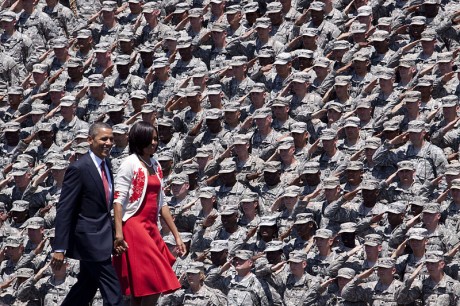