It is impossible for everyone to sell at the top before the implosion; the assets are owned by someone all the way down.

The central bank/state plan for 2015 is a continuation of the same plan that’s been in play since 2009: drive everyone with any cash or capital into ruinously risky bets. The problem for the central bankers/states driving everyone into risk assets is the yields on these bets are entering the exhaustion zone of marginal returns.

In other words, what worked wonderfully for years no longer works at all.

Another way of saying the same thing is apparent stability gives way to instability and apparent predictability gives way to unpredictability. The hubris described yesterday (2015: A World Ruled by Hubris, Willful Blindness and Desperation) arises from the overweening confidence of central bankers that this same tired gambit of pushing assets higher by pushing capital and speculative money into risk assets can be played successfully with no limits.

1. Marginal borrowers/buyers: the game now is to lower interest rates and mortgages rates so ever-more marginal auto and house buyers can qualify for ever-less prudent loans.

This works until it doesn’t, as marginal borrowers/buyers are last on, first off: they default at the first layoff, medical emergency, etc. Defaults tend to pyramid in recessions as lay-offs and financial stress spreads quickly through those living paycheck to paycheck.

All Ponzi schemes eventually fail, though each is declared financially sound because this time it’s different (though it never is). The number of greater fools required to keep the scheme going eventually exceeds the population of marginal borrowers/buyers who have yet to buy in.

At that point, the asset bubble collapses, not from any specific cause, but from the draining of the pool of greater fools: with nobody left to buy, sellers find the market is suddenly bidless–that is, there are no buyers at any price.

3. Highly leveraged speculators have their fingers on the sell button. The name of the game for central bankers for six years has been liquidity: make credit cheap and abundant, especially to hot-money financiers and speculators.

Borrowing immense sums to speculate in expanding asset bubbles is highly profitable as long as the bubble continues expanding. But when the pool of greater fools has been drained and the bubble starts deflating, leveraged bets generate outsized losses. As a result, leveraged speculators must sell first and ask questions later.

Selling begets selling, as other speculators who hesitated must sell before their own losses become ruinous.

4. Everyone’s all-in: greater fools may be willing to buy more risk assets, but eventually they reach the limit of their ability to borrow/buy. At that point, their borrowing/buying ceases.

Then the leveraging up reverses into deleveraging, and the highly leveraged greater fools have to sell to meet margin calls.

All asset bubbles are Ponzi Schemes; so are social welfare programs and unfunded liabilities such as Medicare: 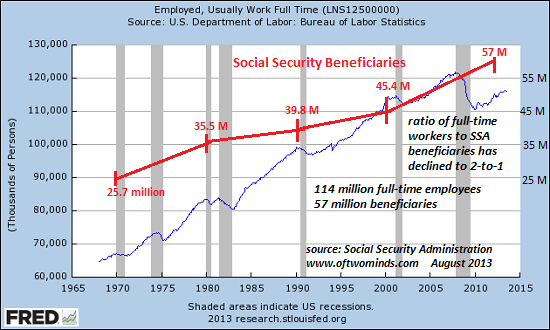 In a zero-yield world of rising rents, everyone is forced into risky stock market and housing bubbles. Central banks have lowered the yield on savings to near-zero, forcing capital to seek returns in risk assets such as stocks, junk bonds and real estate.

As rents rise, the financial logic of buying a house with a low-interest mortgage becomes undeniable: when it costs less per month to buy a house than to rent the same dwelling, why not buy?

This demand pushes the asset class ever higher, generating a self-reinforcing feedback loop that rewards buyers at every stage except the last: when the bubble finally pops, the last cohort of greater fools is destroyed financially, and the previous sets of greater fools are crippled as assets go bidless or lose much of the value.

During this expansion phase, every borrower/buyer is a financial genius, and every central bank that drove everyone into ruinously risky assets is omnipotent and god-like. But when the limits that are intrinsic to Ponzi Schemes are reached and the asset bubbles deflate violently and unpredictably, the geniuses face financial ruin and the central bankers are revealed as scammers, liars and hubris-soaked fools.

Meanwhile, those who resisted the siren song of central bankers to risk their capital and incomes in asset bubbles are derided as Bears who have missed out on the Greatest Bull Market of All Time. When the wheels fall off, all the smart guys naturally claim to have exited at the top. But it is impossible for everyone to sell at the top; the assets are owned by someone all the way down.

All those owners will lose, and continue losing, until the asset is repossessed, sold or surrendered.

The more capital that is driven into risk assets, the greater the financial devastation when the asset bubbles all pop, which they inevitably will–and not in some distant future.