Is the United States about to go to war with the most bizarre nation on earth?Â  A lot of Americans would actually welcome “the Korean War Part 2”, but before people get too excited it is important to keep in mind that we have never been at war with a nation that actually possesses nuclear weapons.Â  At this point it is unclear exactly how powerful North Korea’s nuclear weapons are, but nearly everyone does agree that they are crazy enough to use them.Â  North Korea reportedly has thousands of missile batteries that are capable to hitting the 10 million people that live in Seoul.Â  The death and devastation that an all-out strike on Seoul could potentially cause is almost unimaginable.Â  In fact, the 24.5 million people living either in or around Seoul make it the second largest metropolitan area in the world.Â  The next conflict on the Korean peninsula will be extremely bloody.Â  Nobody should be wishing for that.

Unfortunately, the next Korean war seems closer than ever.Â  Tensions on the peninsula are at a record high.Â  Today, North Korea has one of the largest armies in the world.Â  Some reports claim that they have over 1 million soldiers on active duty.Â  But South Korea is highly militarized as well, and there are 28,000 U.S. troops stationed in South Korea that the North Koreans would have to contend with.

Right now the rest of the world is getting quite nervous, because a war between nuclear powers could get out of hand very quickly.Â  If North Korea hits South Korea with nuclear weapons, it seems almost certain that the U.S. would hit North Korea with nukes.Â  The death and destruction that would result would be unprecedented.

So what does China think about all of this?Â  Well, North Korea would not be acting so belligerent right now if they did not have permission from China.Â  Perhaps China is trying to send a message to the West.

On the other hand, there are others that believe that it could go a lot deeper than that.Â  The regime in North Korea is on the verge of collapsing in on itself.Â  Even the Chinese are getting tired of propping up their government and dealing with their nonsense.Â  The truth is that a new Korean war could benefit the Chinese in several ways.

First of all, South Korea (the biggest U.S. ally in the region) would be absolutely devastated even if they “won” the war.Â  That would cripple an incredibly important geopolitical chess piece.

Secondly, the U.S. would be embroiled in yet another costly conflict and would undoubtedly suffer some costly losses as well.Â  The opinion of the rest of the world toward the United States would darken even more – especially if nuclear weapons were used.

Thirdly, China could gain a ton of “leverage” by stabbing North Korea in the back after the conflict had started.Â  In return for supporting the U.S./South Korean coalition, China could ask for all kinds of things that they wouldn’t even dream of getting right now.Â  In fact, it is not unthinkable to imagine China walking away with a significant chunk of North Korea in the aftermath of the war.Â  The Chinese government is regularly involved in “border disputes” (just Google it), and China would never pass up a chance to pick up a big slice of new territory.

In the end, the “winner” of any new war on the Korean peninsula would probably be China.Â  The U.S. would get rid of the “North Korean problem”, but it would come at a great cost.Â  It is hard to imagine any scenario that would end up greatly benefiting the United States.

Let us hope that a new all-out Korean war does not erupt.Â  North Korea is ruled by delusional leaders who are insane enough to actually use nuclear weapons.Â  If you doubt this, just consider the following 11 facts….

#1 The first “Great Leader” of North Korea, Kim Il-Sung, is deeply revered in North Korea.Â  In fact, there are over 500 statues of Kim Il-sung scattered throughout the country.Â  Many Koreans apparently believe that Kim Il-Sung actually created the world.

#2 It is said that hanging up pictures of Kim Il-Sung is compulsory for every household in North Korea.

#3 Millions of North Korean citizens have literally starved to death over the past 10 years.

#4 The North Korean constitution actually guarantees freedom of speech and freedom of the press.

#5 It has been reported that during times of extreme hunger in North Korea, cannibalism is quite common.Â  Several years ago the Washington Post shared what one 29-year-old female defector told them about what is going on inside the country….

“When one is very hungry, one can go crazy. One woman in my town killed her 7-month-old baby, and ate the baby with another woman.”

The sad thing is that the 29-year-old female defector didn’t even consider what she had seen to be wrong….

“I can’t condemn cannibalism. Not that I wanted to eat human meat, but we were so hungry. It was common that people went to a fresh grave and dug up a body to eat meat. I witnessed a woman being questioned for cannibalism. She said it tasted good.”

#6 In 1987, North Korea began construction on the Ryugyong Hotel, which would have been the tallest hotel in the world if it had been finished on schedule in 1989.Â  Instead, construction of the bizarre 105-story skyscraper that somewhat resembles a pyramid was suspended in 1992, and the unfinished structure was just a massive concrete shell towering over Pyongyang completely empty for the next 16 years.Â  Work began once again on the project in 2008, and it is anticipated that it will finally be completed in 2012. 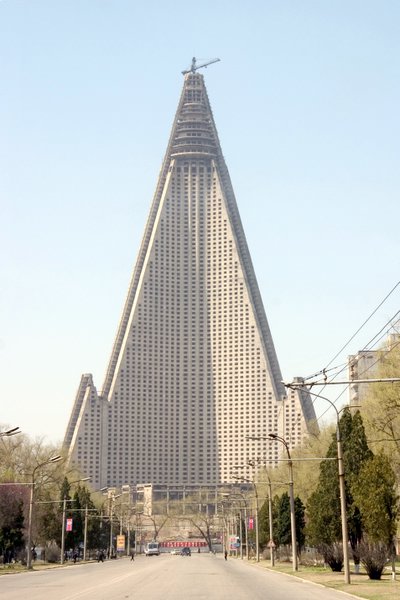 #7 One of North Korea’s greatest “tourist attractions” is the Pueblo – a U.S. naval vessel that the North Koreans captured from “the imperialist Americans” back in 1968.

#8 According to North Korean media, Kim Jong-il is a phenom at just about everything.Â  It is claimed that he shot 38 under par (including 11 holes-in-one) the first time he ever played golf.

#9 Christians are slaughtered in some of the most brutal ways imaginable in North Korea.Â  The following is just one example…..

“While Interviewee 17 was in the North Korean Army, his unit was dispatched to widen the highway between Pyongyang and the nearby port city of Nampo. They were demolishing a vacated house in Yongkang county, Yongkang district town, when in a basement between two bricks they found a Bible and a small notebook that contained 25 names, one identified as pastor, two as chon-do-sa (assistant pastors), two as elders, and 20 other names, apparently parishioners, identified by their occupations. The soldiers turned the Bible and notebook over to the local branch of Department 15 of the Korean Workers Party (KWP), but the Party officials said it was up to the military police unit, Bowisaryungbu gigwanwon, to investigate. Tracked down at their place of work through the listing of occupation in the notebook, the 25 persons were picked up without formal arrest by the military bowibu. The interviewee was not aware of any judicial procedures for those seized. In November 1996, the 25 were brought to the road construction site. Four concentric rectangular rows of spectators were assembled to watch the execution. Interviewee 17 was in the first row. The five leaders to be executed – the pastor, two assistant pastors, and two elders – were bound hand and foot and made to lie down in front of a steamroller. This steamroller was a large construction vehicle imported from Japan with a heavy, huge, and wide steel roller mounted on the front to crush and level the roadway prior to pouring concrete. The other twenty persons were held just to the side. The condemned were accused of being Kiddokyo (Protestant Christian) spies and conspiring to engage in subversive activities. Nevertheless, they were told, â€œIf you abandon religion and serve only Kim Il Sung and Kim Jong Il, you will not be killed.â€ None of the five said a word. Some of the fellow parishioners assembled to watch the execution cried, screamed out, or fainted when the skulls made a popping sound as they were crushed beneath the steamroller. Interviewee 17 thought, at the time, that these church people were crazy. He thought then that religion was an â€œopiate,â€ and it was stupid for them to give up their lives for religion. He heard from the soldiers who took away the other twenty prisoners that they were being sent to a prison camp.”

#10 A few years ago when China was sending humanitarian aid into North Korea the North Koreans decided that they would just start keeping the trains as well.Â  The Chinese crews were sent back over the border on foot.

#11 A song entitled “No Motherland Without You” was written specifically for Kim Jong-il and is one of the most popular songs in North Korea.Â  It is regularly sung by the North Korean military.

Are you convinced yet?Â  The truth is that North Korea is very, very dangerous and they should not be underestimated.Â  Let us hope that the United States never has to fight another war with them.